Yellow jerry-cans scattered on the ground. 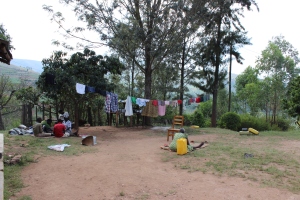 Two young girls cleaning the last of the pots and dishes. Coffee and cassava drying on half-cut sacks near the rabbit house. Grandmother playing ludo on her mat in the center of the yard. Five of her adult grandchildren playing cards under the shade tree. Cock walking, calling. A toddler, with trousers kicked off, running after his inflatable football. Hills of green everywhere you look.

This was midday in Kabasheshe – a rural village in Ntungamo region, western Uganda. I came here for the week to learn about small-scale agriculture and the lives of people who farm for their food and income.

An ambulance brought me here six days prior. It wasn’t for an emergency; the ambulance doubles as a van when the real ones are used by KIHEFO staff. Atayo was driving. Trina and Emily were passengers with me. Along the way, we picked up roadside pineapple, three for 1000 shillings each, to add to my care package of supplies. Kabasheshe is just an hour’s drive from Kabale.

I should mention that the family I would be living with is that of Atayo, my flatmate in Kabale, and Dr. Geoffrey Anguyo, the founder and director of KIHEFO. The grandmother I mentioned above is Dr. Geoffrey’s mother; grandmother in their language of Lougbara is dede. Also in the mix is his father, who goes by the traditional title of musay, or “old man”. The grandchildren – Atoyo’s siblings and cousins – are Judith, Rubina, Monica, Joanne, Milton, Halima, and Sanity. Lincon is Judith’s two-year-old son and has a penchant for acting like he’s twenty, like carrying farm tools twice his size.

After a warm welcome and a side of tea from my host family, we toured the farm. We started near the home and worked outwards. Through a wall of elephant grass, we walked to inspect the coffee field – two and a quarter acres, with a quarter more being prepared for planting, of Robusta and Arabica coffee trees. The harvest was nearing its end with few berries for the picking. Coffee “beans” (actually seeds) exist inside the berries grown on the stems of these trees.

Arabica beans bring more money at the market, but produce less often and the trees have shorter lives. This is why the family’s coffee field is mostly Robusta, with some Arabica trees mixed in between. There are also some young cassava plants, acting as a nursery.

My new family, originally from the northern Arua district, eats a staple diet of cassava, so it is no wonder that three of their nearby paddocks (strips of land with an area of around 1.5 to 2 acres each) have this resilient crop. I learned that cassava – a root vegetable – is grown from stem harvesting, rather than seeds. Basically, after pulling out the tree and harvesting the cassava from underground, a piece of healthy stem, about a hand’s length, is cut and planted. The family has staged their paddocks so that cassava can be harvested daily and the supply will be continuous.

If you take a walk down the hill, passing between the primary school and mosque, onto the football pitch, and along the valley stream, you will find the continuation of the family farm – three more paddocks. One paddock is growing tomatoes, planting just a week ago. Another one will be for chilies. And the final one has cabbages growing near the stream.

At around 20 acres, this farm would be considered quite large compared to other home gardens and small-scale farmers. Although, it a farmer from the Global North might not think so.

Back at home, the family has two areas set aside for grazing goats. And one of their buildings is home to a rabbit breeding center. (See my previous post “What Can a Rabbit Do?” to learn more about the power of rabbits in Uganda.)

But wait! There’s even more.

Around the house there’s an assortment of fruit trees: passion fruit, banana, paupau, lemon, and avocado. All in all, this farm, like many of the neighboring ones, hosts a diverse ecology that allows for the family to not only feed itself throughout the year, but also makes a living.

The first few days, before I would be on my own, also had some interesting ‘firsts’. For dinner on Friday, I had the honor of slaughtering the chicken that would be our dinner. Judith, the eldest of the grandchildren, showed us how she made donuts, or mandas. I had brought a Frisbee as a gift for the children, so we tried it out down at the football pitch. Dancing, music and foot races also helped to pass the time.

All of the family spoke good English, as it was a requirement in school, in addition to their local Lougbara (Arua district), and the southwestern languages of Rukiga (Kigezi district) and Nancoli (Ntungamo district and similar to Rukiga). Grandmother spoke only a few words of English, so I needed to learn Arua to reduce the awkwardness of my presence.

I used a bit of Lougbara to help talk with dede and the young ones:

I also practiced my Rukiga greetings with the townspeople:

Apart from daily activities, including investigating the local water spot, nearby fish farm, and bank cooperative in the next town (I’ll document these in more detail in future posts), I tried my best to learn about rural livelihoods by shadowing the family members.

As the coffee harvest was coming to a close and the animals were being tended by Milton, my first mornings involved going to the tomato paddock. Small tomato trees were planted a week before and the field needed a final weeding. Unfortunately, I arrive not knowing that the tomato plants were in the ground, making for an awkward start. I was told to mimic the others, by making chopping motions with my four-foot hand hoe, pulling dirt and weeds downhill. The tomato plants are only an inch or two tall and unfortunately, look like everything else. After being told to avoid the plants and seeing the rows made the process much less nerve-wracking.

By not using tractors or other farm equipment, the work has to be done by hand. Weeding, planting, harvesting. All of these parts are done by hand or with the aid of a hand hoe. It means that farmers can have 2, 3, 4, or more varieties of crops, all within sight of one another, all working together. Trees don’t need to be removed. Hills can be maximized. A local, natural way of farming.

Although the family did other chores back at home – drying coffee, grinding cassava, collecting milk down the road – most of our time was free to interact. There were cards games. They taught me Master. I taught them Hearts and Speed. I showed the kids how to make paper airplanes and what tic-tac-toe is. We shared stories, listened to music, and danced from time to time. The biggest surprise for me was how much time was spent watching television. The area received electricity a few years before and it has allowed for a major improvement to the family. Not only hearing world news, but having lighting and power to charge things like phones.

Overall, the week showed me how similar a farming life in Uganda is to one in Canada. The crops may be different and there is an obvious disparity in machinery and chemicals used, but at the end of the day, after all the hard work is done, people enjoy their spare time by relaxing, watching something on the TV and playing card games together.

We’re not so different.

Photos from the week: