At the end of a fun weekend, I was driving from Queen Elizabeth National Park back to Kabale. Along with a group of American and Canadian medical and public health students, I was returning from three days filled with safari and boat adventures in Southwestern Uganda. Before our weekend came to a close, we stopped at the Satellite Hotel for lunch. The hotel offers an impressive lookout for travelers along the Mbarara-Kabale Road and its restaurant was advertising a special of Fish and Chips. I jumped on the bandwagon and ordered a plate.

Fast forward two weeks and now I’m standing next to the pond where the fish I ate was raised. This fish breeding pond – one of four – is part of a business called Satellite Farmers Limited, located at the junction to Kabasheshe in the Ntungamo district. I originally decided to come here to see and learn about their first farms, but I ended up leaving with a much better understanding of how this small enterprise was playing a big role in the community.

My tour guide and teacher would be Godrey, a 20-year-old secondary school student, who was in charge of this facility. As we talked (or, more accurately, as I continually asked questions) he began to open up and seemed excited to share his work with me.

We started outdoors, walking along the trail that connects the fish ponds. Some filled with catfish and others of an unknown kind, these ponds were dug and filled only six months ago, but already had thousands of fish. To help me see their scope, as the water was murky and hid what lay underneath, Godrey went into the green, aluminum building nearer to the road to grab some feed. He threw it into the water and little mouths started to appear. Above the water were lines, closing each other in a grid formation and about 12 inches apart. These lines are used to prevent birds, which are abundant, from flying down and stealing a meal.

On top of the fish sold to the hotel down the road, Satellite Farmers Limited sells local eggs, handheld sprayers, building materials, and the animal feed (mostly for chickens and pigs) that Godfrey used earlier. But catfish are special. Instead of regular feed, they are given meat, chicken to be exact. I was fortunate to see a farmer come in and leave a bucket of future fish food. The blue plastic bucket contained slurry of meat byproduct. The innards of a chicken – heart, lungs, intestines – that people don’t consume and farmers can’t use can be brought here and sold, adding to their income and maximizing the usefulness of a single chicken.

Speaking of chickens, they have those too, both layers and broilers. Layers are the hens that produce eggs, while a broiler is a chicken raised for just the meat. An egg here sells for 250# (250 shillings, or 10 US cents), while the same egg at the rural market would sell for 400#. Say you’re the head of a household and you were looking for an affordable source of protein, this would be your best place to start. Or, if you are a market seller and looking for something to sell, this place could be your supplier, where you can buy and then sell eggs, making 150# profit on each one; you wouldn’t even need to own a chicken. 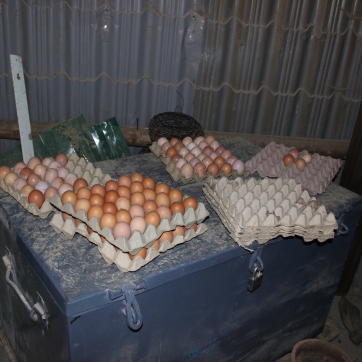 Godrey led me inside the Feed Mill, which has been in the community for over two years and was started by a man simply known as Chief.

“Who else works here?” I asked Godfrey, as we passed through the doors. “No one”, he responded, “just me.” I was perplexed. The feed mill is massive. It is similar to something I would find back home in Rural Canada. Inside, there were bags everywhere. Scales for weighing, office desks to handle paperwork, and an unorganized stack of water troughs in the corner took up more space inside this building.

It turns out that Godrey is the only full-time employee of the operation, selling eggs, equipment and bags of feed, and feeding the fish as needed. When animal feed needs to be mixed, he goes to the local trading center and hires up to five temporary workers. Together, they can produce one to two tons of feed each hour. This high level of productivity is probably the reason why Godrey can manage everything alone.

The animal feed they manufacture consists of various elements, including silverfish, maize bran, broken maize, cotton cake, shells, sunflower, and calcium. Some are sourced locally, while other bags come from the capital of Kampala. In either case, the concrete floor where these bags are tossed provides another destination for farmers to bring their grains. 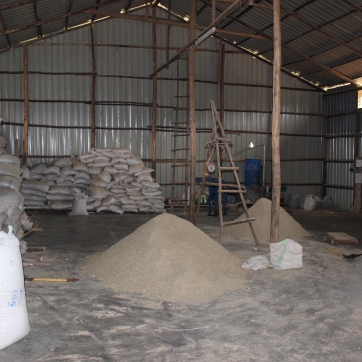 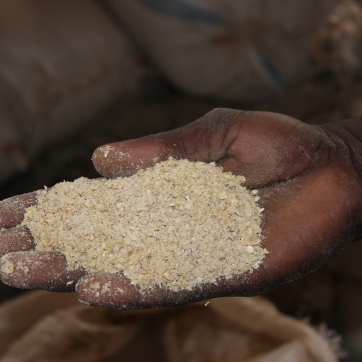 It might not seem like much, but in a country where youth unemployment can reach 80%, it is nice to see a successful and growing business that is providing full- and part-time jobs to local residents. Not only that, they are providing tools to farmers to maximize their productivity and earn more, all within walking distance from their fields. Additionally, Satellite Farmers Limited is acting as a link from rural farmers, buying their excess grains, to outside markets, meaning a greatly level of economic stability in this community of a few thousand low-income farmers.

I left by thanking Godrey for his time and sharing so much knowledge with me. I also bought some eggs; it was too good of a bargain not to. This small business, invisible from the paved main roads, in Southwestern Uganda is quietly achieving what so many educated experts have failed to do – foster employment, assist farmers, and grow the local economy.

If you’re interesting in learning more about businesses in emerging markets or innovations in rural agriculture, feel free to contact myself. Questions are welcome and encouraged.