The thing about new human endeavors is how easy and obvious they seem in hindsight.

From sailing around the world t 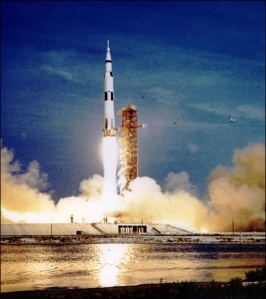 o submerging to the bottom of the ocean, humanity is defined by inspiring people solving seemingly impossible challenges.

We’ve designed telescopes that peer deep into the universe and particle colliders that tell us how it all began. We’ve built airplanes that defy gravity (and made the world seem smaller). We’ve even sent men to the Moon! This last great achievement, accomplished in 1969, is what I would like to discuss now.

The Space Race of the 1960s between the USA and the USSR showed how human imagination, combined with technology and science, can make something which seems impossible possible. It’s astonishing to think that John F. Kennedy promised (quote below) to have an American land on the Moon less than 60 years after the Wright Brothers first flight! From our feet off the ground to our first steps on another body of the solar system in only six decades!

“We choose to go

“It is for these reasons that I regard the decision last year to shift our efforts in space from low to high gear as among the most important decisions that will be made during my incumbency in the office of the Presidency.”

The Apollo program brought imagination and inspiration to the world and to the generations that followed. (To learn more about the details to America’s push to make Kennedy’s goal a reality, I can’t recommend enough the HBO miniseries From the Earth to the Moon. The 12 episodes explores various aspects of NASA’s Mercury, Gemini, and Apollo space programs, from the design of the lander to the stress on the wives of the astronauts.)

So, why do I bring up this pinnacle of human achievement? It’s not for a history lesson. I use it to show what humanity can carry out when we put the best minds in science, the right leadership from government, and the hopes and dreams of the world together to tackle a singular challenge. Like the challenge of climate change.

Climate change is a change in the statistical distribution of weather patterns when that change lasts for an extended period of time. Our contribution to this process started about 150 years ago with the Industrial Revolution, when we started to burn coal, oil, and gas, releasing carbon into the atmosphere. We’ve increased the average global temperature by 0.8 degrees Celsius since then and are on track to add a few more degrees by the end of this century. Add to fossil fuel burning the systems of industrialized farming, which realizes methane, and deforestation, that reduces photosynthesis, you create an industrial world and global warming.

A comparison between sending a man to the Moon and man-made climate change is even more apt when considering their respective (and in many instances, overlapping) detractors. I’m talking about conspiracy theorists – the people who ignore scientific evidence and replace it with their own gut feeling on the matter.

Deniers of the Moon landing will point to any minor flaws in the video, photos, or speeches related to Apollo as evidence of its fraud, without evaluating the technology at the time and the many scientific discoveries that resulted, both of which are much more powerful points of discussion. Likewise, climate change deniers will say that climate always changes, or that humans can’t possibly impact the planet’s nature, or even that the scientists are publishing papers for the money! Both of these cases have the same problem: the skeptics don’t look at the science.

Coming from Alberta – home of the Athabasca oil sands – makes this debate even more difficult for myself. Politicians, business leaders, and most people want oil sand extraction and the employment it creates. Nature, however, can go fend for herself. But what does the unbiased, scientific world say.

The Intergovernmental Panel on Climate Change (IPCC) is the scientific body in which the world’s governments go to for consensus on this issue. They have written five reports since starting in 1988 and won the Nobel Peace Prize in 2007 for their contributions.

This is the science. You either accept it or need to find some evidence to the contrary.

Climate change, along with general environmental issues, is something that I’m particular interested in, but it’s an issue that other people might take less seriously. In the arena of international problems, there are plenty of causes to focus on: poverty, civil war, malaria, lack of clean water, hunger, and more. But what makes climate change different (especially, when compared to that list) is that it affects all humans. ALL humans. Not just the poorest in the world.

Unaddressed climate change will also make current problems worse. Climate refugees will need new countries to call home. Droughts and floods will add chaos to growing seasons. Warming climates will mean a spread of mosquitoes and other pests. And, as the IPCC notes, it will cost more later if we don’t address it now. So, government will have less funds to solve these and other important issues. If we know we need to act, then we need to ask can we solve it.

What are the costs and do we have the technology to solve global warming?

Unlike the Space Race, which had to design and build equipment over years to finally make their goal real, we have the technology and know-how at our disposal today. For a reference point, NASA calculates that the Apollo program costs were roughly $170 billion, in 2005 dollars.

For decades, coal, oil, and gas companies received large subsidies from governments to keep costs low. Whereas, the renewable energy sector – makers of solar panels, wind turbines, and geothermal heating – have only started to subsidies, in a bid to compete. If you included the cost of carbon, which polluters get to release for free, and tax relief than the subsidy level would be as high as $2 trillion, according to the IMF. These numbers are even more ridiculous because BP, Exxon Mobil, and Gazprom are some of the most profitable companies in the world. Would it make any sense to give subsidies to Apple and Samsung to make our phones? The answer is no, it would not. Especially when health and education are needed more.

The costs to adapt to existing climate change and then mitigate future effects is estimated at $100 billion per year. The cost of doing nothing will be even higher. We need the political will, from public pressure, to change the status quo: moving away from a carbon-intensive economy to a carbon-free one.

But, do we have the will to change?

There are two major reasons why humans act: greed and grievance. Unlike many human accomplishments, originating for either monetary gain or increased self-esteem (greed), climate change is social justice fight (grievance). Climate change is caused, predominately, by high-industrial nations – USA, Canada, European Union, Japan, and Australia – as well as emerging economies – China, India, Brazil. Developing countries are the ones who will be most affected by the negative consequences of climate change and, importantly, have contributed the least to the problem.

So, the case to tackle climate change is a moral one. And it starts will all of us, changing our daily habits. But it also needs global unity, as we’ve done with space exploration and the International Space Station.

Let’s go back in time for a moment and pretend that President Kennedy had climate change on his mind. Go back and read his speech again, but instead of starting with “We choose to go to the Moon”, replace that opening line with “We choose to prevent climate change” and see what happens. It spoke volumes to me and shows the value of great leadership.

I hope the Earth will stay this beautiful until the next time we step on the Moon.

I urge you to become active in the climate change debate. Start discussing this issue with friends and family. Make your home more energy efficient. Explore more by watching a documentary (Chasing Ice is a great one). Drive less. Walk more. Lobby your government representatives to end fossil fuel subsidies.

Even small changes make a difference.

One thought on “The Power of Humanity to Reach New Heights”