“I wish my artwork could persuade millions of people to join a global conversation about sustainability.”

Through his aerial images, Canadian photographer Edward Burtynsky has indeed persuaded many people, including myself, to join the conversation on environmental sustainability. (Edward Burtynsky’s artist website here. Photos above from 1, 2, 3, 4, 5, 6, 7 sources.) The man-made industrial landscapes he photographs evokes awe from the viewer at the force and scale of destruction our species is capable of inflicting on the environment. Nature – the land, air and seas – is essential for human survival. However, nature has been fundamentally transformed in modern times, as Burtynsky reveals:

“Nature transformed through industry is a predominant theme in my work. I set course to intersect with a contemporary view of the great ages of man; from stone, to minerals, oil, transportation, silicon, and so on. To make these ideas visible I search for subjects that are rich in detail and scale yet open in their meaning. Recycling yards, mine tailings, quarries and refineries are all places that are outside of our normal experience, yet we partake of their output on a daily basis.

“These images are meant as metaphors to the dilemma of our modern existence; they search for a dialogue between attraction and repulsion, seduction and fear. We are drawn by desire – a chance at good living, yet we are consciously or unconsciously aware that the world is suffering for our success. Our dependence on nature to provide the materials for our consumption and our concern for the health of our planet sets us into an uneasy contradiction. For me, these images function as reflecting pools of our times.”

Our times are defined by hyper-industrialization. Industry is extracting commodities – oil, stone, etc. – to produce products – electronics, vehicles, etc. – at unprecedented rates. Burtynsky’s work and corresponding books below capture these themes on a global scale. No nation or people is immune from his lens and the questions it ultimately poses.

Industry functioning within capitalism caters to the wealthiest segments of society, which has historically been the colonial/imperial powers of Europe and North America, while impoverished regions suffer the majority of the consequences. The planet is buckling under this rate of change and will have a difficult time adapting to over seven billion equally hungry consumers. Worst of all, we, as a species, are slow to do anything about this. Burtynsky reflects:

“Like all animals, human beings have always taken what they want from nature. But we are the rogue species. We are unique in our ability to use resources on a scale and at a speed that our fellow species can’t.”

The environmental movement has been fighting for decades to raise the public’s consciousness about the concerns of air and water pollution, over-fishing, deforestation, waste and, most recently, climate change. Success has been mixed but hasn’t reached a tipping point of public backing. Burtynsky shines a light on one of the reasons why: 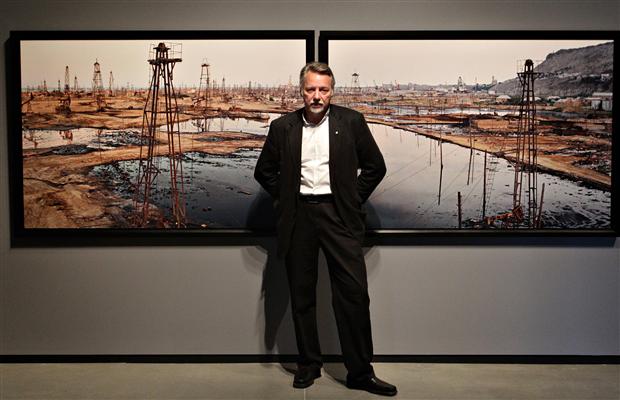 Edward Burtynsky standing in front of his work at the Art Gallery of Alberta, 17 September 2010

Green politics has emerged as a real alternative, including political parties, to the political economy that has gotten us to this point. It questions the environmental degradation and uneven development created and maintained by global industrialization. It posits social alternatives to a worldview built on a finite resource: oil. It blends ecological respect with social justice and participatory democracy. At its core, green politics can use the imagery of Burtynsky to re-think what future we all want:

“You need to have an inquiring mind. You have to ask questions (…), not accept what is given, but say: ‘Why is it so?’ And it is in that kind of asking that you begin to get behind some of the issues that allow the world appear the way it does. So if you just accept the world the way it is and don’t question it I can’t see how you can go far creatively.”

Burtynsky has moved into the medium of film as well. In 2013, Burtynsky released Watermark, a documentary he co-directed with Jennifer Baichwal. In 2006, Baichwal had made Burtynsky the focus of her film Manufactured Landscapes.

Manufactured Landscapes highlights footage compiled from a trip to China where Burtynsky visited factories which Western society has come to rely on for most of its appliances, including a factory that produces most of the world’s supply of clothes irons, which is one kilometer in length and employs 23,000 workers. The film also features the Three Gorges Dam, which, along with being the largest dam in the world, has uprooted more than one million people and flooded 13 cities, 140 towns and 1350 villages since the beginning of its construction in 1994.

Watermark features water use practices around the world, including multiple scenes in China and the United States, as well as segments shot in eight other countries. In China, the film chronicles the building of the Xiluodu Dam and flooding of its reservoir. Unlike most documentaries, these films feature very little commentary, which allows viewers to take in the images and try to make sense of what they’re seeing, while at the same time the film “tries to shift our consciousness about the world and the way we live in it”.

In all, Burtynsky forces us, as humans, to resolve whether we will prioritize our environment, which sustains life, or industry, which consumes it. As Burtynsky notes:

“We come from the nature and we have to understand what it is, because we are connected to it and we are part of it. And if we destroy nature we destroy ourselves.”