Four decade ago, the women of Iceland decided to call for a “day off”. On 24 October 1975, 90 percent of women in Iceland, in both urban and rural communities, did not go to their paid jobs or do housework or childcare at home. They refused to work to raise awareness that women at the time earned over 40% less than men. “As a result, many industries shut down for the day,” writes libcom.org:

Flights were cancelled as flight attendants did not come to work and bank branches had to be staffed by executives as tellers took the day off.

Fish factories were also closed, with many nurseries and shops also shut or at reduced capacity.

That sunny day would become an annual tradition in Iceland known as “Women’s Day Off”. The rally in Reykjavik’s Downtown Square gathered 25,000 women and was the largest of more than 20 to take place throughout the country. It was a moment that changed the way women were seen in the country and helped put Iceland at the forefront of the fight for equality. 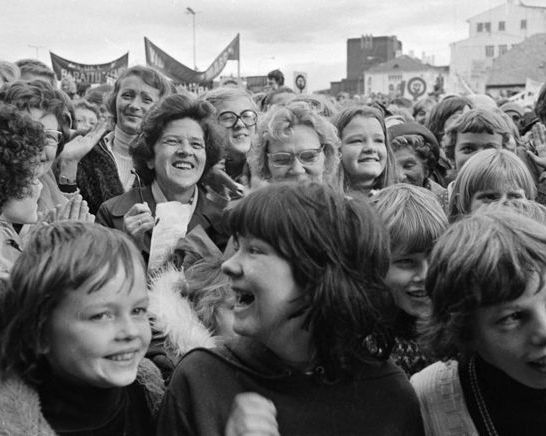 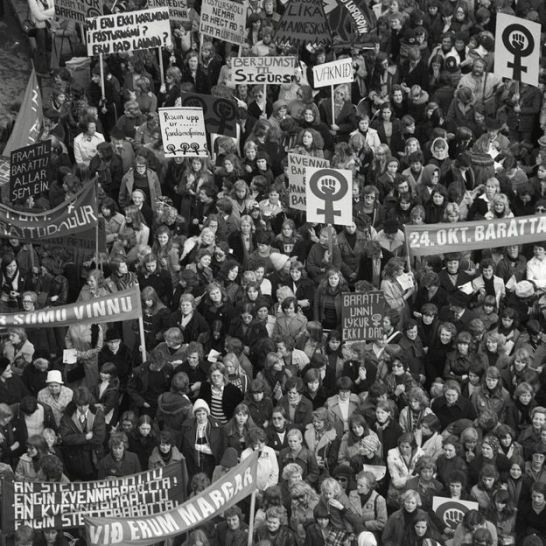 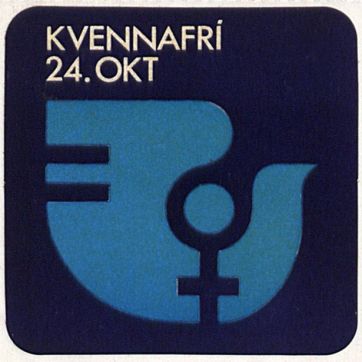 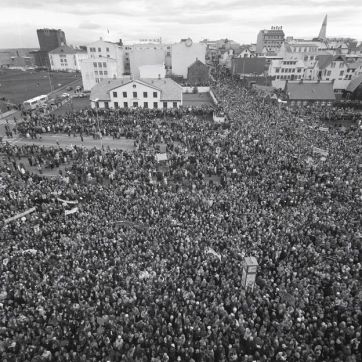 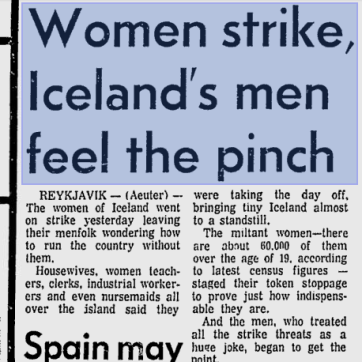 Five years later, during the summer of 1980, the people of Iceland elected Vigdis Finnbogadottir, a divorced single mother, to be their president. Vigdis was Europe’s first female president and the first woman in the world to be democratically elected as a head of state. Vigdis went on to hold the position for 16 years – years that set Iceland on course to become known as “the world’s most feminist country”. Vigdis insists she would never have been president had it not been for the 1975 protest. “What happened that day was the first step for women’s emancipation in Iceland,” she says. “It completely paralysed the country and opened the eyes of many men.” By uniting women from all social and political backgrounds, the day of action in 1975 was able to bring the issues of unpaid care work and wage inequality to national (and ultimately international) attention. The movement carried on the tradition British suffragette Emmeline Pankhurst foresaw decades earlier: “We have to free half of the human race, the women, so that they can help to free the other half.”

At the turn of the 20th century, Pankhurst and other suffragettes, during what is now referred to as the “first wave” of feminism, pushed governments around the world to allow women the right to vote, starting with New Zealand in 1893. Women in Australia got the vote in 1902, followed by Finland in 1906. Iceland was next, in 1915. The 1910s also saw Norway (1913), Soviet Russia (1917), Canada, Germany, Austria, Poland (all 1918), and Czechoslovakia (1919) do the same. Suffrage in US and Hungary came in 1920. The UK saw full voting rights for women later in 1928, following limited suffrage from 1918. Switzerland was one of the last countries in the world to allow women to vote, taking until 1971 to do so! These fights for political equality were followed by a second wave of grievances, ones opening the door to economics.

The two movements in Iceland – the “Day Off” and the election of Vigdis – illustrated the interconnection of economic and political inequalities women face within a patriarchal system. In 1975 there were just three sitting female Icelandic MPs, or just 5 percent of the parliament, compared with between 16 and 23 percent in the other Nordic countries. Globally, women continue to be underrepresented in politics. Without also gaining equal political representation for women, it will be difficult to achieve equal pay for equal work.

In 1976, a year after the strike, Iceland formed the Gender Equality Council and passed the Gender Equality Act, which outlawed gender discrimination in workplaces and schools. Today Iceland has the highest level of women’s participation in the labour market, with heavily subsidised childcare and three months’ paid parental leave to each parent.

Despite these improvements and being the best country in the world for gender equality – the country has topped the U.N.’s Global Gender Gap Report for the sixth year in a row – women in Iceland still earn on average 14 to 18 per cent less than their male colleagues. Currently, there’s no country in the entire world where a woman earns as much as a man for doing the same job. This is know as the “gender pay gap”. According to unions and women’s organisations, this means in every eight hour day Icelandic women are essentially working without pay from 2:38 pm. So, to mark the 41st anniversary of the original “Women’s Day Off,” thousands of female employees across Iceland walked out of workplaces at 2.38 pm on Monday to protest against earning less than men.

In eleven years, less than three minutes has been gained annually towards eliminating the gender pay gap. If progress continues at the same rate, it will take 52 years to eliminate the disparity between men and women’s earnings in Iceland entirely.

The fight for gender equality in 1970’s Iceland is reminiscent of battles in other countries, such as the UK. In 1968, five women led a strike of sewing machinists at Ford Motor Company Limited’s Dagenham plant in London, which employed tens of thousands of workers. (The film Made in Dagenham chronicles the strike.) Ford was making billions in profits while the women in its plant were struggling to pay their bills.

The 187 women made car seat covers and as stock ran out the strike eventually resulted in a halt to all car production. The women walked out when they were informed that they were graded as “less skilled” and that they would be paid 15 percent less than the full rate received by men, both of which were common practices for companies at the time. The strike soon spread and, with the help of the Secretary of State for Employment and Productivity, ultimately resulted in the passing of the Equal Pay Act 1970, which did, for the first time, aim to prohibit inequality of treatment between men and women in terms of pay and conditions of employment in the UK.

Research shows that the gender pay gap is not the same among all women. It cuts differently across racial lines. A woman in the US typically earns 6 to 39 percent less than a white man; but a woman of colour earns less than her white counterpart.

The older you are, the bigger the gap. A 2014 survey by the Chartered Management Institute and XpertHR on the gender pay gap last week found that female managers earn less than their male counterparts, with the gap increasing with age. At 23 percent, the management gender pay gap is wider than the 19.7 percent in the workforce as a whole.

The gender pay gap also varies widely from country to country, the World Economic Forum reports. A woman earned only 48 percent of a man’s salary in Italy and 47 percent in Israel.

Burundi, where four out of five people live below the poverty line, is the top country in women’s pay. Women in the tiny African country earn 83 percent of salaries of the men in the same jobs.

In the so-called “developed world” women’s wages come closest to men’s in Norway and Singapore, but even there it’s still at 80%.

Why does the gender pay gap exist?

After fighting for the right to vote and to be legally protected from discrimination by employers, women are told that the gender pay gap doesn’t exist. So, to answer that question, it’s necessary to first dispel some of the common myths, according to the European Commission.

Myth #1: More women work part-time, so they should earn less.

Women tend to earn less per hour than men for the same job whether it is a highly-skilled profession like a doctor or nurse or a lower-skilled job such as a salesperson. The gender pay gap exists across our economy, and in all sectors and occupations.

Myth #3: Men are better educated, so should earn more.

Today, 60% of university graduates in the EU are women.

Women’s equality movements in Iceland and elsewhere, combined with ongoing research, continue to remind us of these facts. Despite major gains in achieving higher education, girls and women have equal access to education in only 25 of the 142 countries. Discrimination from birth through schooling prevents women from achieving their economic liberation. Even worse, Algeria and Iran have the lowest female participation in the labor force with less than one in five women working outside their home.

Men still dominate the worlds of business and politics – Jamaica, Colombia, Lesotho and Fiji are the only four countries with more female legislators, senior officials and managers. Men continue to make up the majority of those in the highest paid and most senior roles – for example, there are just five female Chief Executives in the FTSE 100. Male-dominated companies and legislatures have repeatedly shown their unwillingness to address gender discrimination unless they are pushed by movements seeking change.

New laws need to be passed to overcome remaining barriers to women. More countries should consider passing legislation to ensure paid maternity leave for mothers and should include equal levels of paternity leave for fathers. Until men take an equal share of care work (of children, of the aged, of their spouses), women will continue to face an unfair job market.

Women in business, like Facebook COO Sheryl Sandberg, are trying to provide their own solution: corporate feminism. In the book Lean Out, Dawn Foster unpicks how the purportedly feminist message of Sandberg neatly exempts patriarchy, capitalism and business from any responsibility for changing the position of women in contemporary culture. Foster and others point out that corporate feminists want women to work within the sexist system of business without changing its fundamental problems. Gloria Steinem provides a simpler examination: “If you say, I’m for equal pay, that’s a reform. But if you say, I’m a feminist, that’s a transformation of society.”

Another book that questions the current state of affairs is Who Cooked Adam Smith’s Dinner? by Katrine Marçal. In her book, Marçal shows that even today, the unpaid work of mothering, caring, cleaning and cooking is not part of our economic models. All over the world, there are economists who believe that if women are paid less, then that’s because their labour is worth less. Until political economies value all women at all levels of society, there will never be an “economic woman” like the “economic man” that has existed for millennia.