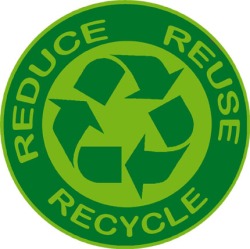 Growing up as children, we were all told to “Reduce, Reuse, Recycle.”

Collecting glass bottles, aluminum cans and plastic containers was easy to do and felt good. And since it was in line with this simple three-word chant, it seemed like we were doing the right thing. Unfortunately, this chant has not curbed the growing consumerism found in rich, Western countries.

One reason is that it equates a reduction in the consumption of products with recycling products. These are two very different actions. The easy-to-recognize ‘green triangles’ that are found at recycling facilities and on most products themselves further this inaccuracy.

We have become societies that rely on both to take care of our needs and any associated costs. We have removed ourselves from the debate.

A decision-making hierarchy is needed to change the shopping habits of consumers. Here’s one example of that idea:

To think about this, let’s look at the fashion industry.

Greenpeace provides an overview of the water depletion, pollution and waste that our fashion choices produce:

According to Plenitude: The New Economics of True Wealth by Juliet B. Schor, Americans for instance, consume three times as much as their ancestors did fifty years ago, and they buy twice as many items of clothing as they did twenty years ago. In 1991, the average American bought 34 items of clothing each year. By 2007, they were buying 67 items every year. That’s a new piece of clothing every four to five days!

Consumers, especially people who purchase with extreme frequency, need to evaluate the true costs of their purchases.

Let’s look at another example, one that is small is size but has a big impact: the plastic water bottle.

A hundred years ago, Leo Baekeland invented Bakelite, an inexpensive, nonflammable, versatile, and popular plastic, which marked the beginning of the modern plastics industry. In the podcast “How Oil Got Into Everything”, NPR reports how Baekeland’s process put oil into everything we use today: our sneakers, our clothes, and the computer or phone that you’re looking at right now.

It was a discovery that has had far-reaching, negative consequences in the decades that followed.

Plastic has been a tool for increased industrialization and progress, while also fueling climate change and environmental degradation. It’s been a blessing and a curse. Nothing illustrates this more than the plastic water bottle.

Americans buy an estimated half a billion plastic bottles of water every week. Even with widespread recycling, an estimated 2 million tons of plastic water bottles end up in landfills every year. To counter this, cities like San Francisco have introduced bans on the sale of single-use plastic water bottles on city-owned property. These political steps are useful but must follow a change in consumer perception and action.

Multi-national bottling corporations, like Pepsi and Coca-Cola, backed by lobbying groups, like the International Bottled Water Association, have been marketing bottled water as better than the incredible low-cost alternative: tap water. This is nothing but a sales pitch. In San Francisco, like most cities in North America, an estimated one third of bottled water is repackaged tap water.

The solution is to invest in a water bottle, filled with tap water. Cities and municipalities need to invest in clean drinking water with adequate water fountains.

You don’t have to recycle when you reduce your shopping habits.