“Recent years have seen a panic over “online red-light districts,” which supposedly seduce vulnerable young women into a life of degradation, and New York Times columnist Nicholas Kristof’s live tweeting of a Cambodian brothel raid. But rarely do these fearful, salacious dispatches come from sex workers themselves, and rarely do they deviate from the position that sex workers must be rescued from their condition, and the industry simply abolished — a position common among feminists and conservatives alike.

“In Playing the Whore, journalist Melissa Gira Grant turns these pieties on their head, arguing for an overhaul in the way we think about sex work. Based on ten years of writing and reporting on the sex trade, and grounded in her experience as an organizer, advocate, and former sex worker, Playing the Whore dismantles pervasive myths about sex work, criticizes both conditions within the sex industry and its criminalization, and argues that separating sex work from the ‘legitimate’ economy only harms those who perform sexual labor. In Playing the Whore, sex workers’ demands, too long relegated to the margins, take center stage: sex work is work, and sex workers’ rights are human rights.”

– Summary of Playing the Whore from goodreads.com

Debates about prostitution tend to cover many topics, ranging from informal economics to public health, but ultimately comes down to one central element: control. Control of women. Control over women.

Those involved in sex work, whether they use the label of prostitute, sex worker or something else, belong to a part of society largely overlooked by society. Like the homeless or the unemployed, society, generally, looks down upon them while rarely offering respect for their human dignity or considering their current state as a temporary one. Leaders in both public and private sectors rarely given them a chance for inclusion into the rest of society.

Grant’s Playing the Whore is a simple yet exhaustive study of all the areas which affect sex workers, including the police, the media and the groups who see themselves as the ‘savior’. Largely excluded from the discussion on criminality, depiction or alternatives are sex workers themselves.

Just as women of colour and lesbians of generations past had to face off against straight white feminists of movements past, sex workers who seek autonomy and respect have to face off against anti-prostitution feminists today who offer neither. Grant documents how feminists in the anti-prostitution movement organize events and talks about sex work while, without seeing the problem, never including sex workers.

Female sex workers, like the many others who preceded them in the women’s liberation movement, continue to counter the conservative values, often shaped by Christian morality, that come to control their daily life. Although those people who buy sex sometimes face arrest, the burden falls predominantly on the woman. Sex workers face widespread violence and harassment by police officers. Sadly, the rest of society does not value sex workers much better.

In the same way that substance abuse is now seen as a health concern and something that shouldn’t be treated with criminalization and imprisonment, prostitution should be seen as an issue of employment needs. Unfortunately, politicians, supposed “advocates” and others refuse to see their place as seeking harm reduction, as is being done for addicts. Similarly, the role for police in both instances is to protect citizens – all citizens – especially those most vulnerable to receiving harm.

The central element of the book, which is signaled by its subtitle, “The Work of Sex Work”, is that of employment. Bringing her own stories as well as other sex workers, Grant describes the informal nature of today’s sex work. The women’s liberation movement has long been about women’s economic liberation. From unpaid care work to the gender pay gap, women have long suffered from an economy tailored not to them but towards men. Sex work is no different. Grant connects the work of sex work to other forms of self-employment within the informal sector, such as hair stylists, and service industries, like retail. Until all women are given the economic opportunities to live a dignified and comfortable life, these forms of informal or part-time employment will have to be used.

The debate on economics applies to countries around the world. As Grant points out, the movement to “rescue” sex workers in Asia and elsewhere does not address the economic, political and social disadvantages sex workers face inside and outside the profession. Even if victimized women are rescued, they receive little more than job training to low-paid labour. A sign in a Cambodia textile shop employing former sex workers point to this realization. It reads:

Until we begin to see women – all women – as equal members of society, short-term fixes will not have the power to liberate sex workers when they continue to live in poverty. For those women who are left without alternative employment, decriminalization and support should be a first priority, not fear of the police and exclusion from ‘mainstream’ workers.

The debate between a woman’s right to self-determination and conservative traditional values in society is linked to another contentious issue: abortion.

In the United States, like most countries around the world, abortion was important for family planning but seen as a criminal action. This period, half a century ago, was also marked by near total male representation in politics. In 1973, the US Supreme Court determined that abortion was a constitutionally protected act with Roe v. Wade. Since then, conservative groups have fought to make abortion illegal or impossible to get. 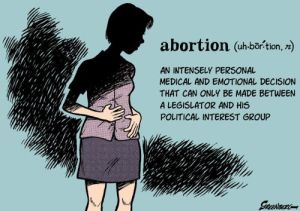 The documentary TRAPPED showcases doctors who perform abortions in some states in the United States who have fought against so-called TRAP (Targeted Regulation of Abortion Providers) laws. Since 2011, states in the South and Midwest have passed more than 300 abortion restrictions — TRAP laws, admitting privilege requirements, rules for how medication abortions may be performed, bans on abortion after 20 weeks (and sometimes earlier), longer waiting periods, and greater impediments to teenagers seeking abortions without parental approval.

Earlier this year, in the case of Whole Woman’s Health v. Hellerstedt, the US Supreme Court found that TRAP laws in Texas placed an “undue burden” on women seeking abortion and thus violate the Constitution. This is a major victory for women’s rights and may signal the beginning of TRAP laws being overruled across the nation.

TRAPPED follows in the footsteps of other documentary films shining a light on the battle over a woman’s right to choose. Six years ago, 12th & Delaware revealed the fight on the titular street corner in Fort Pierce, Florida, between a for-profit abortion clinic and a Roman Catholic Church-supported pregnancy clinic whose mission is to prevent women from obtaining abortions. While the abortion clinic takes precautions against threats of violence and fends off protesters, the pregnancy clinic actively spreads misinformation to women about the dangers of abortion.

A decade ago, Lake of Fire depicted the heated abortion debate that was already waging for decades in America. Leaving no stone unturned, it featured graphic footage of actual medical procedures and presented people on both pro-choice and pro-life sides of the issue.

These films add to the lengthy abortion debate in the United States and reveal the tactics of those groups opposed to a women’s right to choose how her pregnancy is managed. Ultra-conservative and Christian groups lie to pregnant women, spreading misinformation and fear. They set up anti-abortion pregnancy centres, which act as red herrings to women who are seeking abortions, while never disclosing their real ideology. These tactics show no respect towards pregnant women who, for whatever reason, have decided that a medically-assisted abortion is the right decision. Instead, they fool pregnant women, delaying their decision beyond what the law allows and, in effect, force vulnerable to follow through with their pregnancy against their will. A shameful game of politics over people.

The abortion debate in the United States has not been peaceful either. Groups like Operation Rescue and others promote violence to achieve their ends. It’s not just psychological violence. Although conservative and Christian groups regularly protest outside clinics and yell at women who enter, they also conduct terrorism. Male opponents to abortion (it’s almost always men who become violent) have repeatedly assassinated doctors and fire-bombed clinics, spreading fear and pressuring providers to close their doors. The entire anti-abortion movement ultimately furthers these horrendous acts of violence through their misinformation and shaming protests. Sadly, this violence in the name of opposing reproductive rights is not limited to only the US. 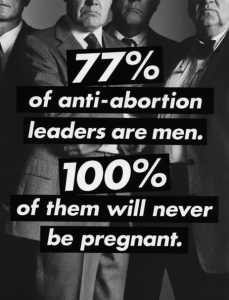 The concept of rescue is found in the ideologies of both anti-prostitution and anti-abortion. Rescue from what? Rescuing women from themselves, it seems. From decisions about their health, their well-being, their finances, and their work. The debate doesn’t typically expand past what to do once women are “rescued”. They are thrown back into society to fend for themselves without the political, economic or social support they may have wanted in the first place.

It’s difficult to ignore the irony at the center of debates on women’s rights: the loudest voices aren’t women. Men make up the majority of anti-abortion advocates. One of the biggest anti-abortion voices is the Catholic Church, which is built around female subservience to male clergy. Male legislatures pass laws without talking to female voters.

Although women are often found protesting prostitution and abortion, the organisations they represent are, more often than not, led by men. Men who will never be pregnant. Men who have more employment opportunities than women and who can purchase sex from prostitutes without fear of much prosecution or persecution.

Men need to stand aside and listen, rather than stand at the front and dominate the discussion. We need to stop making decisions about those we know little about.

Ultimately, the fight is not over whose morals should dominate because this is not a debate over ideas; it’s a debate over people. People who have the right to determine their own lives. All human beings deserve dignity.

All struggles are connected since, as the organisation Black Women for Wages for Housework said, “When prostitutes win, all women win.” Hookers and housewives unite!