In recent years, I’ve thought about race and racial discrimination in our world. I’ve written about racism in the American criminal justice system and how it continues the legacy of slavery; how movies vilify characters of color; the indifference towards refugees of color and growing Islamophobia within Europe and the United States; and hostility of white society towards racial justices movements like the Black Panthers and Black Lives Matter. By reflecting on the consequences of racism, I have been able to turn the corner racism and see how my white identity is central to the problem and solution. 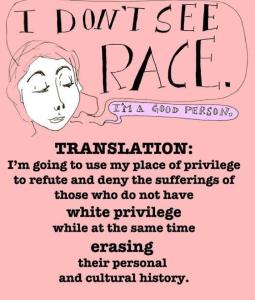 As the political theorist, Barnor Hesse, explains, the idea of race is fundamentally about the creation of a division between Europeans and non-Europeans, both internally, beginning with the Spanish expulsion or forced conversion of Jews and Muslims, and externally within systems of colonial rule, and of course in the transatlantic slave trade across the Americas. END_OF_DOCUMENT_TOKEN_TO_BE_REPLACED